A closeup look at a Drouyn drum kit. 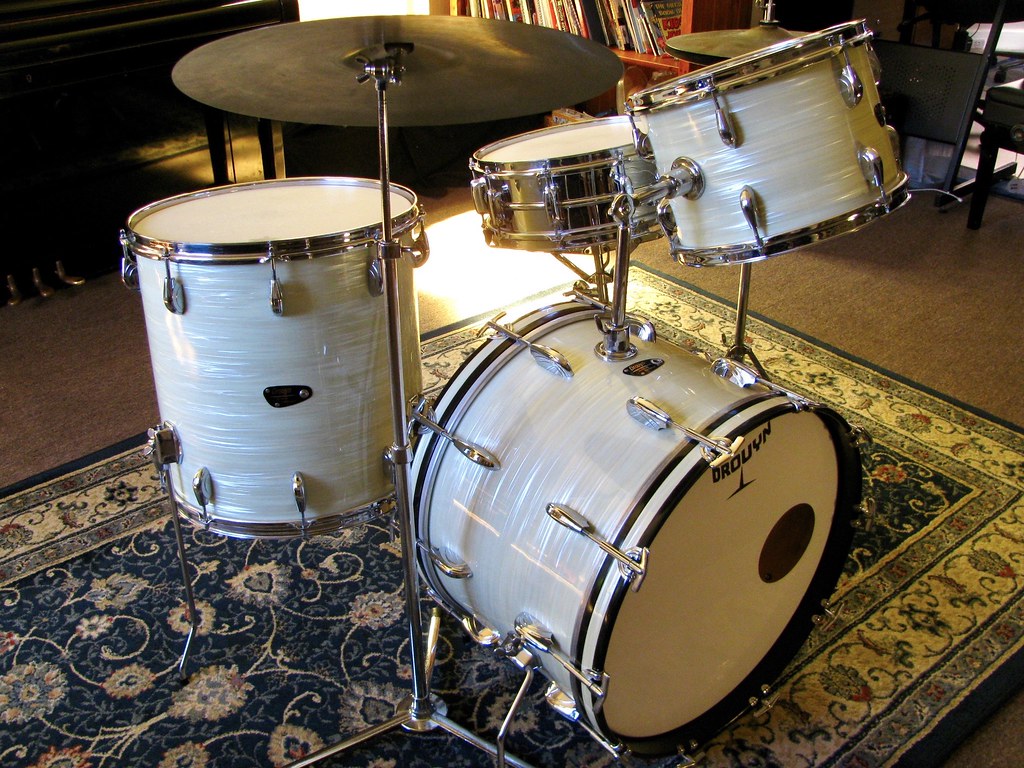 This is a Drouyn “Professional Series” drum kit, circa 1965. The colour is most likely “Marine Mist Pearl”. The sizes are: 20/13/16, with 14″ x 5″ S100 alloy snare. This drum kit was originally sold from Theo’s Music, St George’s Terrace, Perth, Australia in 1965 or possibly early 1966. It came with hardware, including the A602 foot pedal; the A600 (or an earlier version) hi-hat stand; snare stand (model unknown) ‘Vynex’ vinyl cases in ‘Tobacco Tan’; 14″ Zildjian New Beat hi-hat cymbals; an 18″ Super Zyn medium cymbal; a Premier cymbal stand and a small accessory case containing sticks, brushes, drum keys and a selection of drum books from the era. 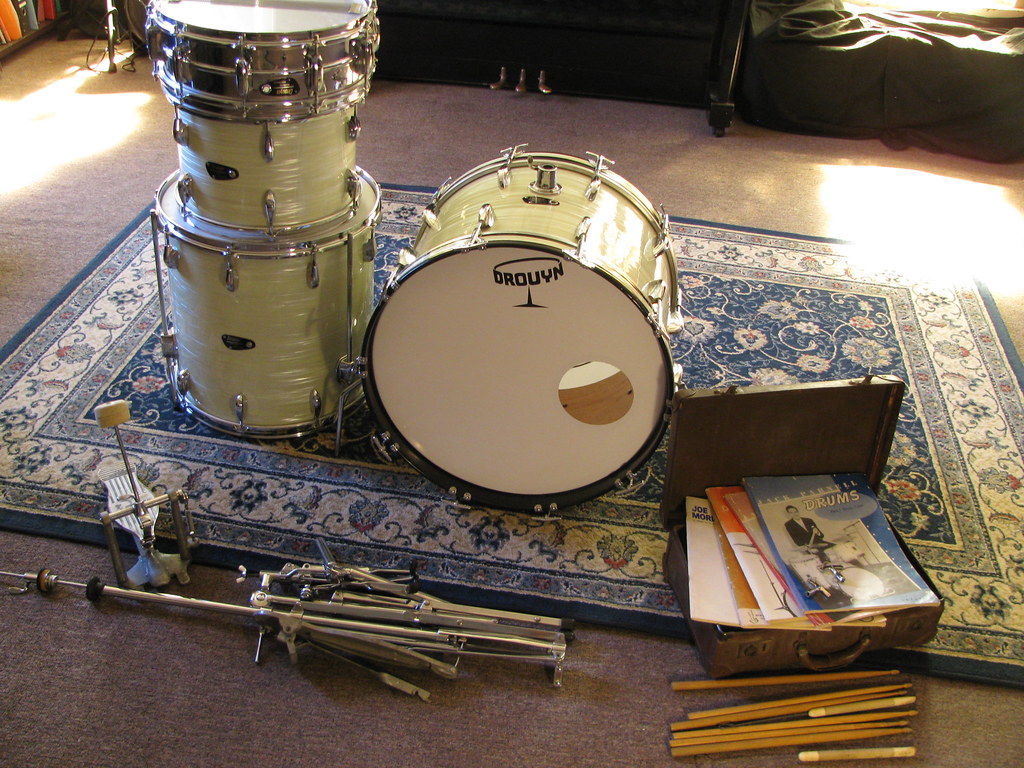 My first experience with Drouyn drums was a set I owned when I was about 14. This was in the 70’s and the kit had a few different features from the one pictured, such as retractable spurs, a bass drum cymbal stand and slotted lugs. I had been looking for a similar kit for quite a while when I came across this one. It was an earlier model, but looked to be in very good condition. After it arrived at my house, my first impression was that I had opened a time capsule from the 1960’s. Inside the bass drum were newspapers with stories about the disappearance of Harold Holt. As I worked on the set, I began to understand some of the effort that had gone into it’s construction – and more than a few questions were raised as well.

The wrap is thick and very good quality. It’s similar to wraps from Delmar, a company that made most of the covering for the major USA companies at the time. The colour looks like a finish used in the 1960’s called “White Ripple”. It has faded fairly uniformly; but not badly. The exact source of the wrap is unknown. I have been told that it came from an Italian drum manufacturer, Meazzi. While this can’t be verified, it’s certainly possible. One interesting feature of the wrap is that apart from being very well attached, there is no overlapping seam. The edges butt together, very neatly. I was able to really examine the wrap on the bass drum hoops. These inlays came off completely when I was cleaning the hoops; after that I decided to paint them. The inlays had shrunk a little which was common with these types of finishes. But it was in very good condition and not brittle.

The bass drum measures 20″ wide by 13 11/16″ deep. This model is the Professional Series B201. It was sold as 20″ x 14″. The shell is 4 or 5 plies of the same timber and looks to be Rose Alder. When the hoops were stripped, they turned out to be a different, lighter wood with a wider grain. They may be Huon Pine. The lugs are larger versions of the “snail” designs on the toms. The tees and claws are small, quite heavy and very solid. They look just like Premier lugs. The tom mount is very simple and looks a little home made (though certainly functional). The mystery on the bass drum is the leg mounting blocks. They are copies of the popular 1960’s Ludwig style; but look Japanese. I have had to repair two with stripped threads. In the process of finding a helicoil for it; I discovered that the mounting screws are 8.5mm metric. I have no real evidence on this, but MIJ drums are now very popular and I have seen these exact blocks from a 60’s Pearl kit. However, I have had good information they were made in Brisbane. 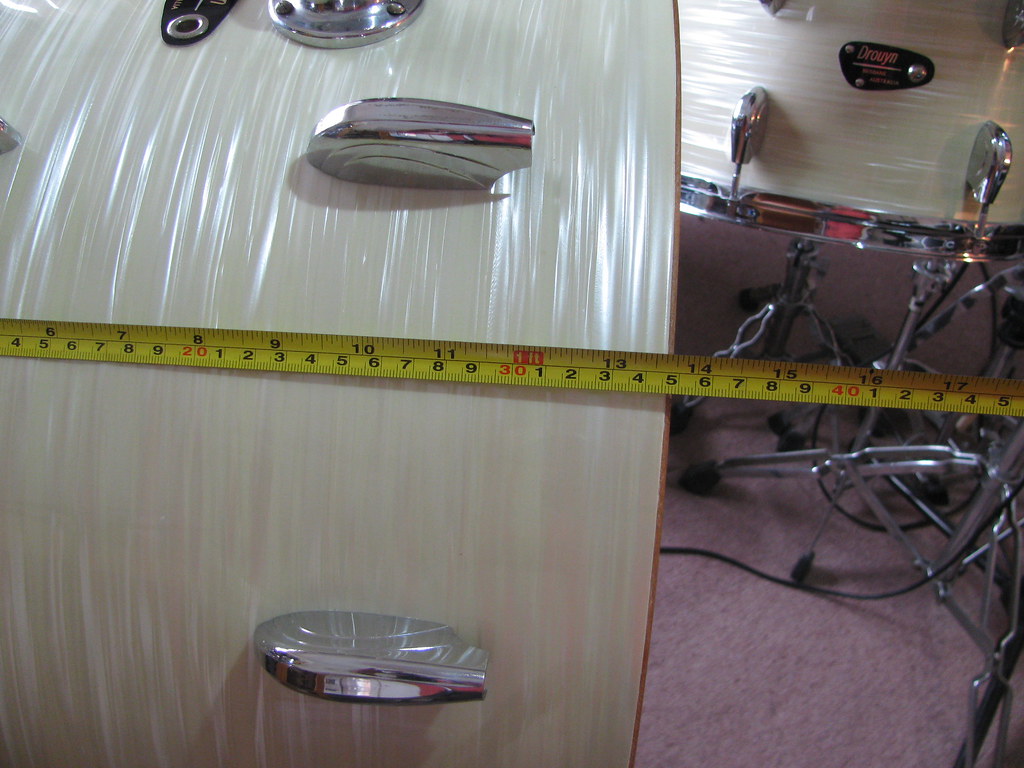 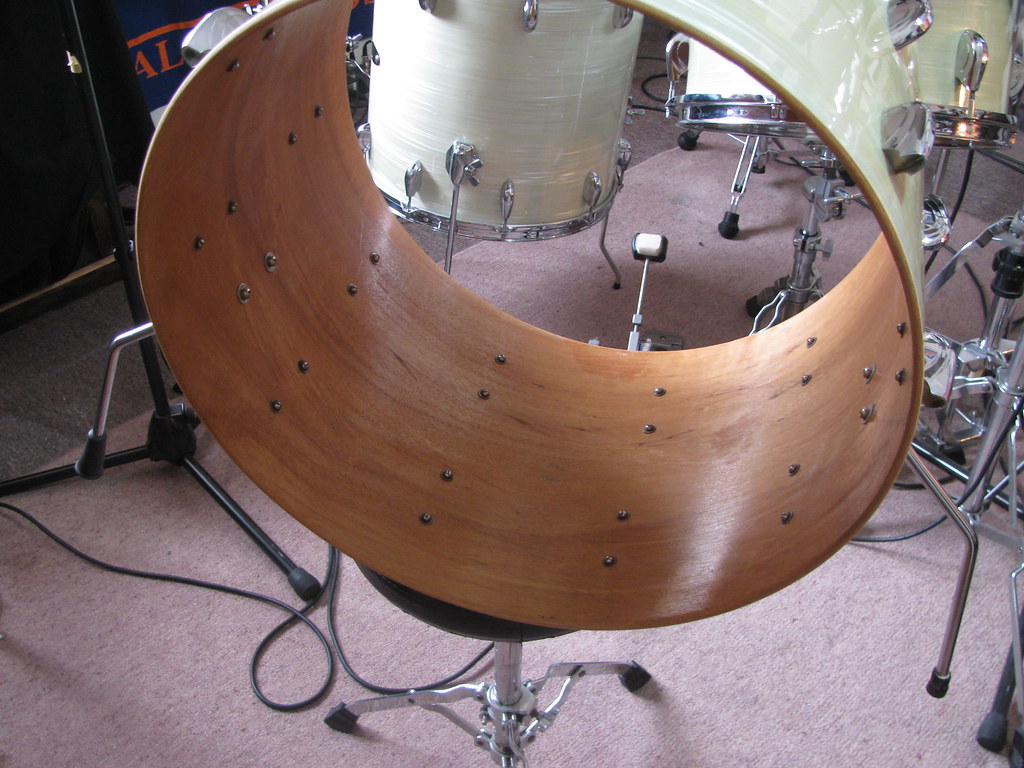 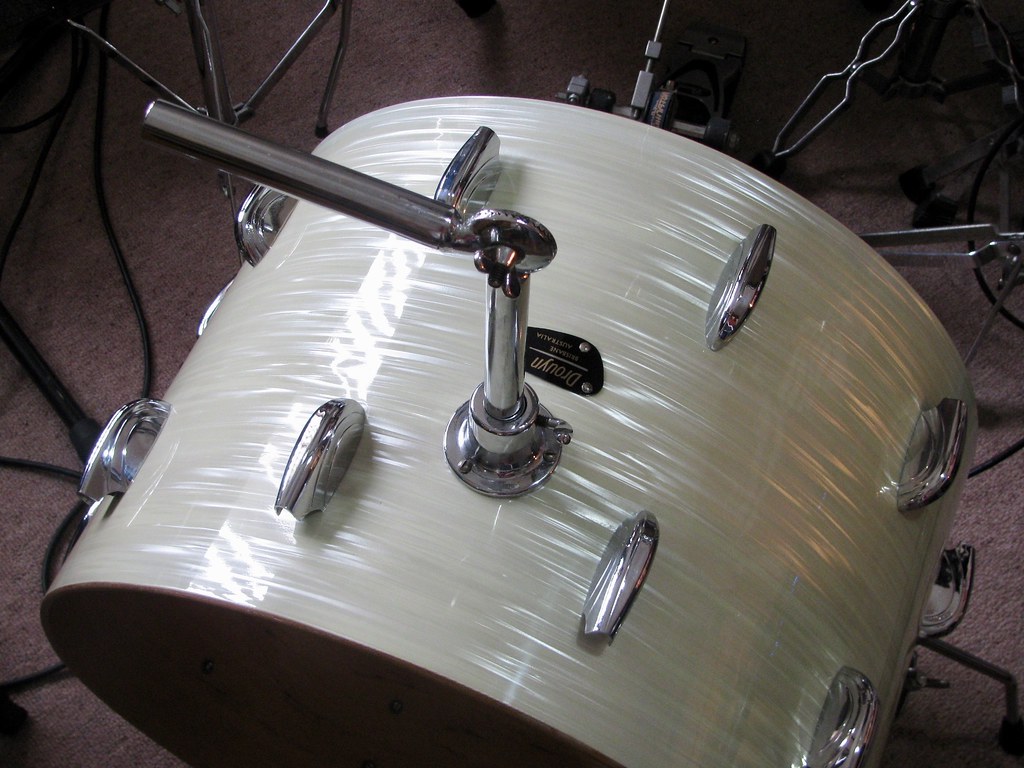 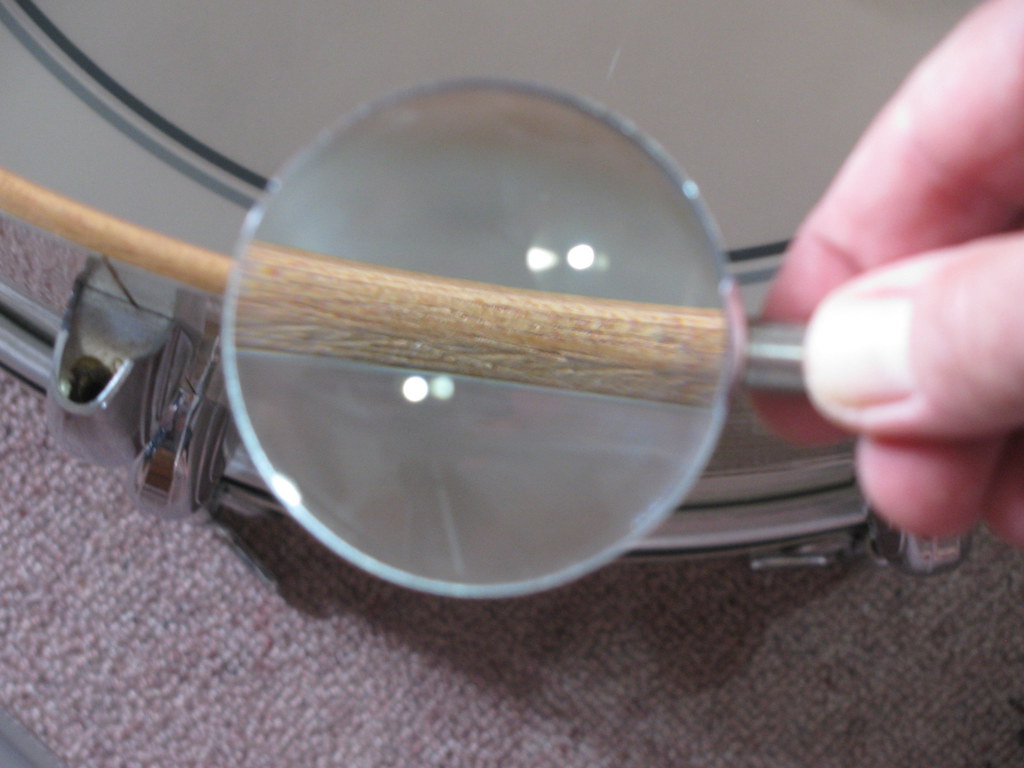 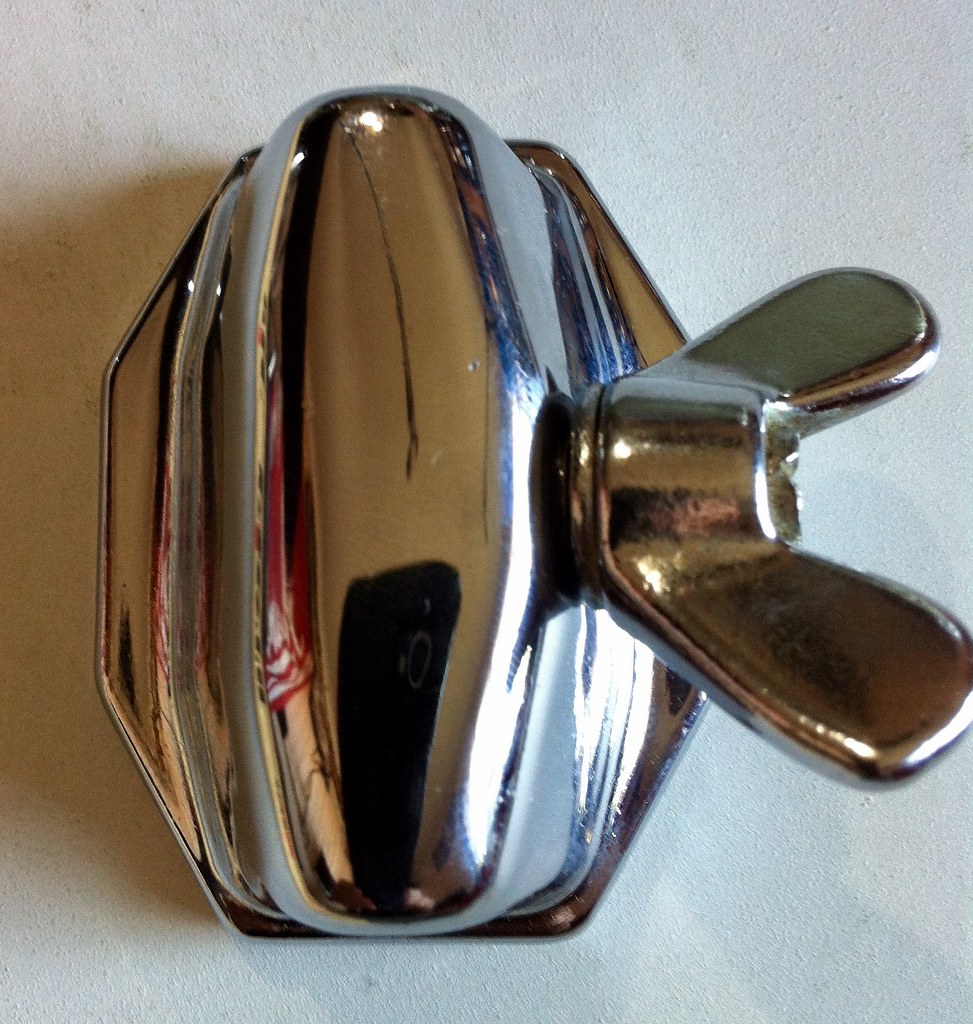 Drouyn became well known in Australia for making a style of bass drum previously not seen locally. These bass drums were typically 16″ or more deep. These deeper drums were sometimes called “cannon” bass drums. These sizes later became common in modern drums. But at the time, they were quite revolutionary, at least in Australia. It would be interesting to know where these sizes were first developed. 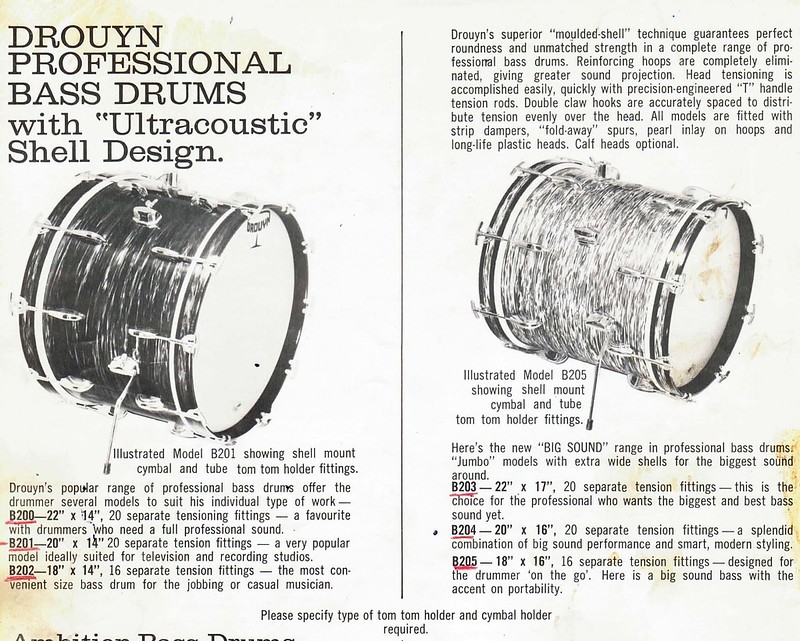 The floor tom in this kit has one feature which stands out. It has 9 lugs top and bottom. A few other companies including Sonor also did this at some stage. If you think about it, this makes perfect sense as far as balance goes. Since a floor tom sits on three legs, they are evenly distributed between the 9 lugs. Of course, should you happen to lose a top or bottom rim on one of these drums – you’re in quite a bit of trouble. The numbers written in this drum provided me with further clues on the serial number format. Job lot “6542” could mean 1965, #42, as the 13″ drum has “6543” included in its numbers. It has top and bottom internal dampers.

This drum shell appears to be three ply. The mounting blocks are similar to the bass drum, although there does seem to be a slight angle, which means they need to be mounted the right way up. The rims are the typical lightweight flanged version which Drouyn made. The interior of this drum is particularly nice. 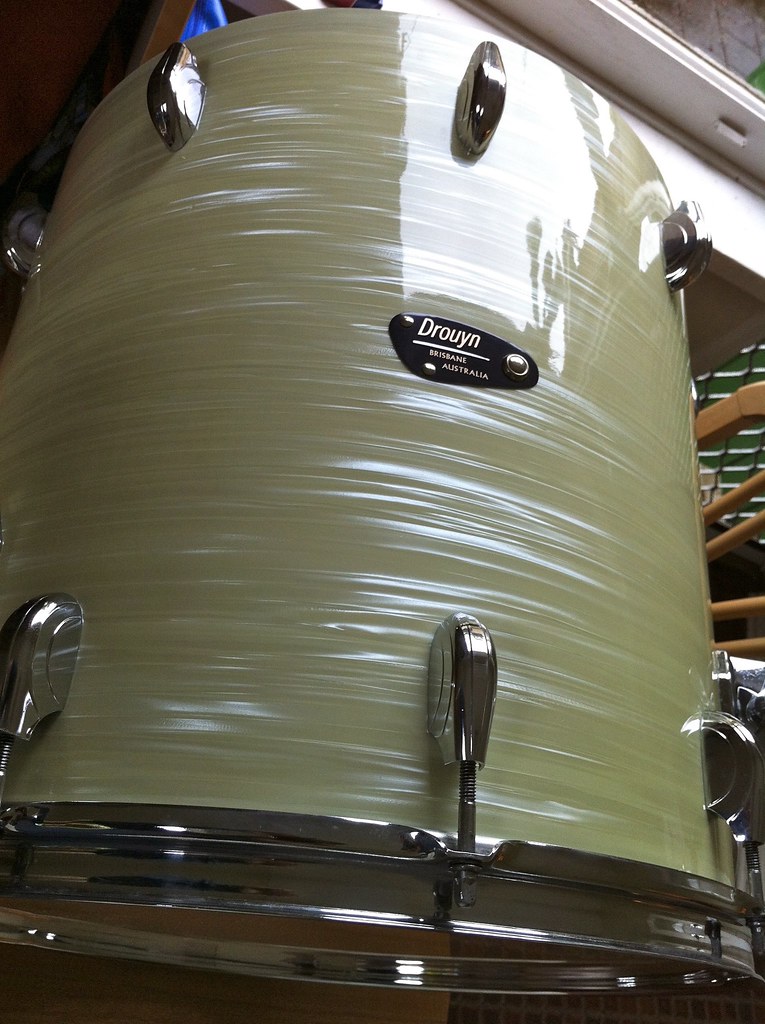 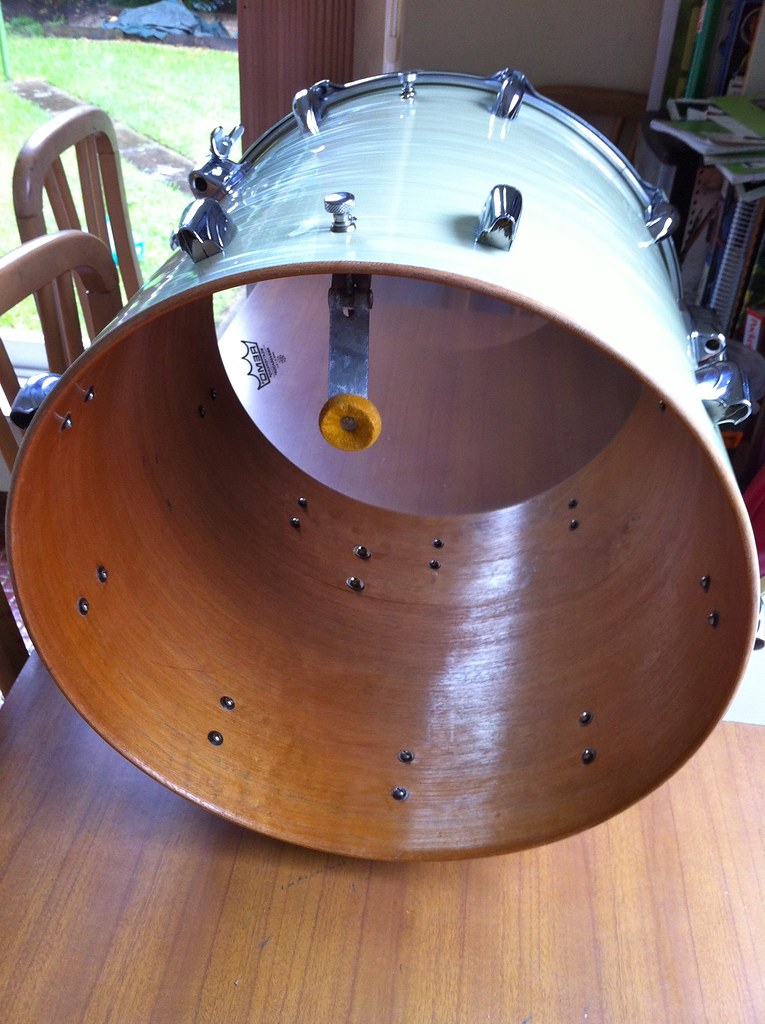 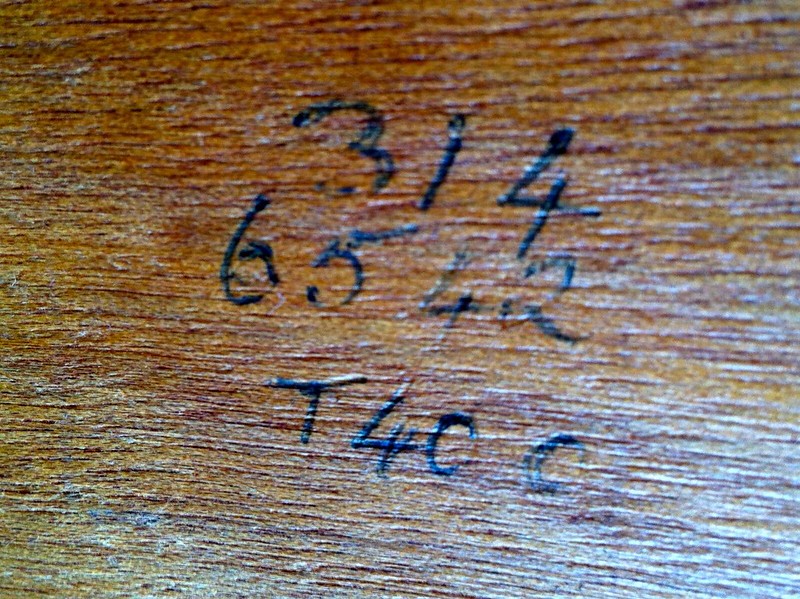 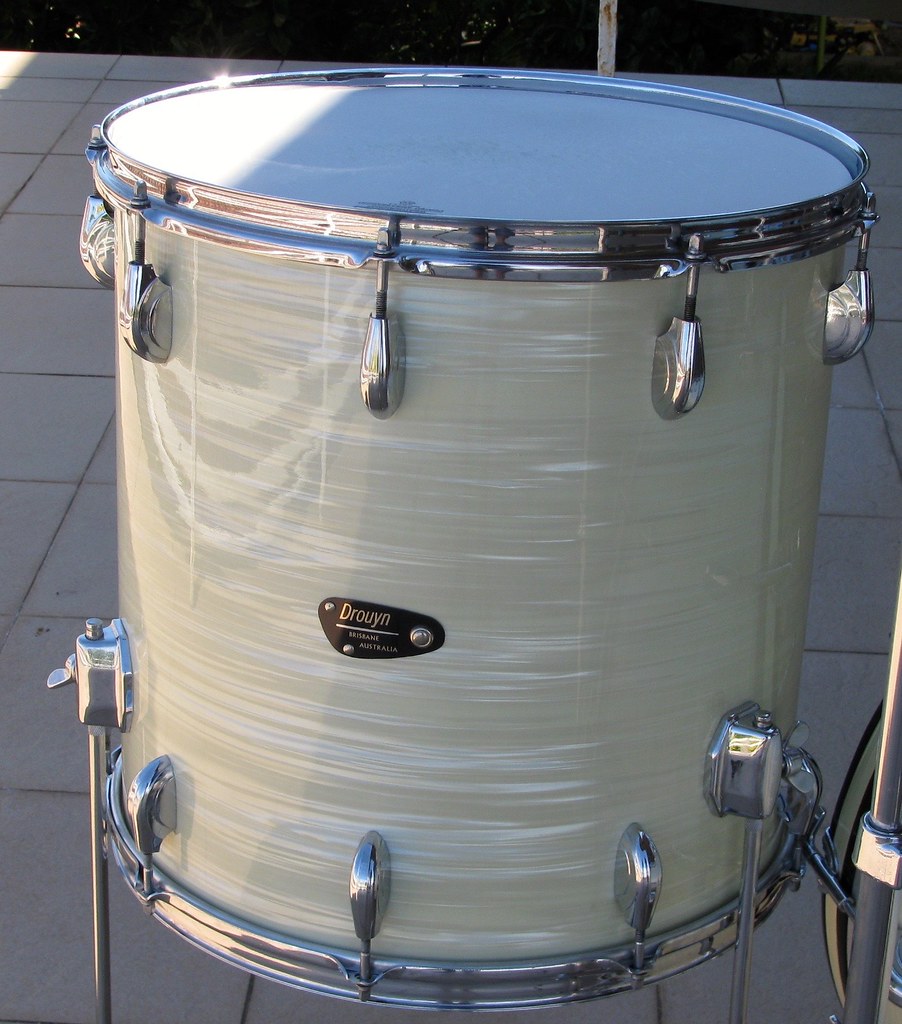 The drum is 13″ x 9″. It’s a three ply drum; dampeners top and bottom; with no air vent. These plies seem slightly thicker than the bass drum. It’s in excellent condition. The serial numbers follow on (in part) from the floor tom. 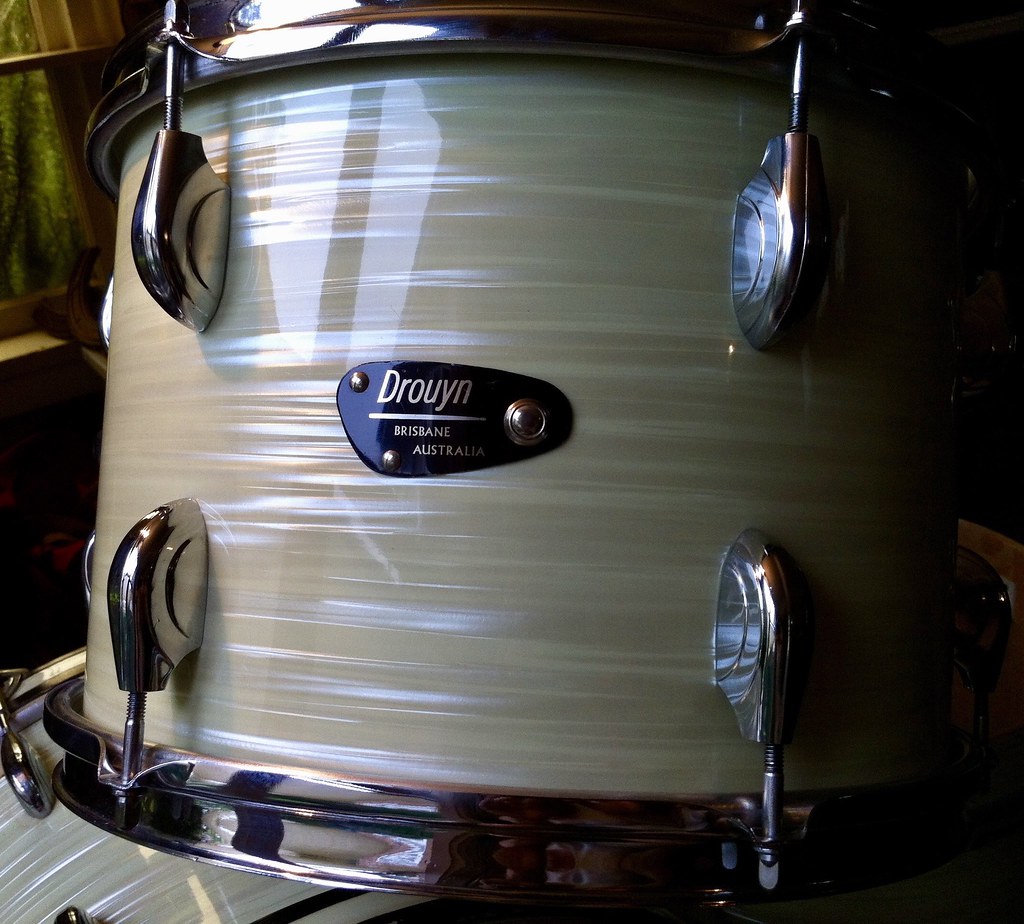 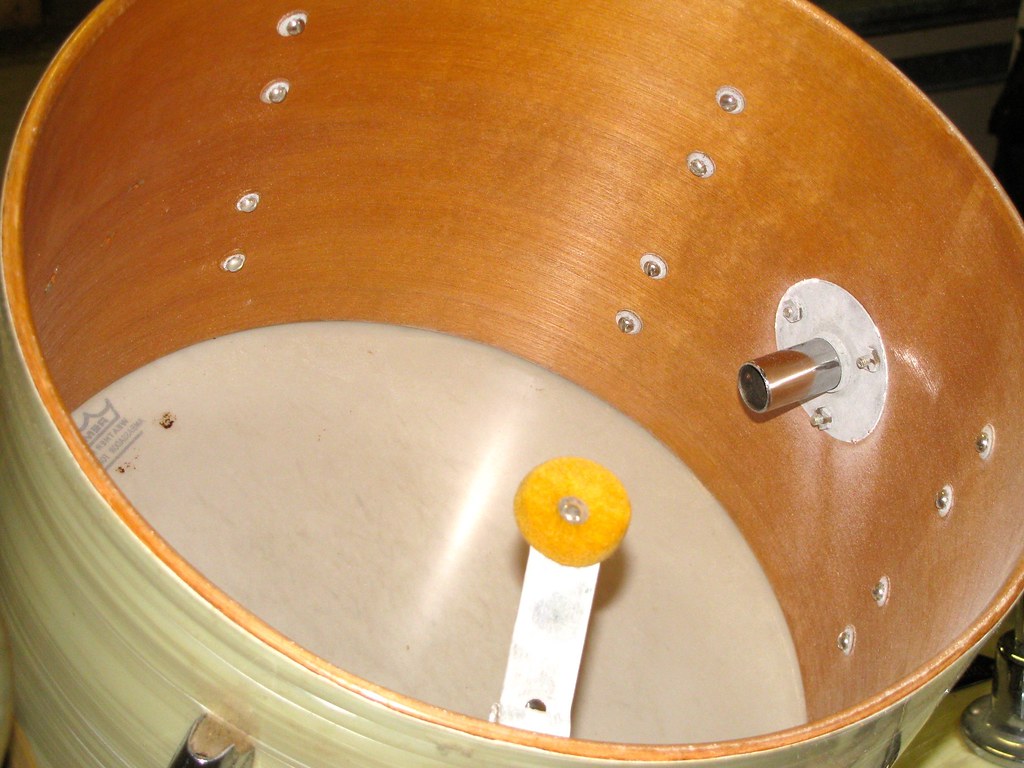 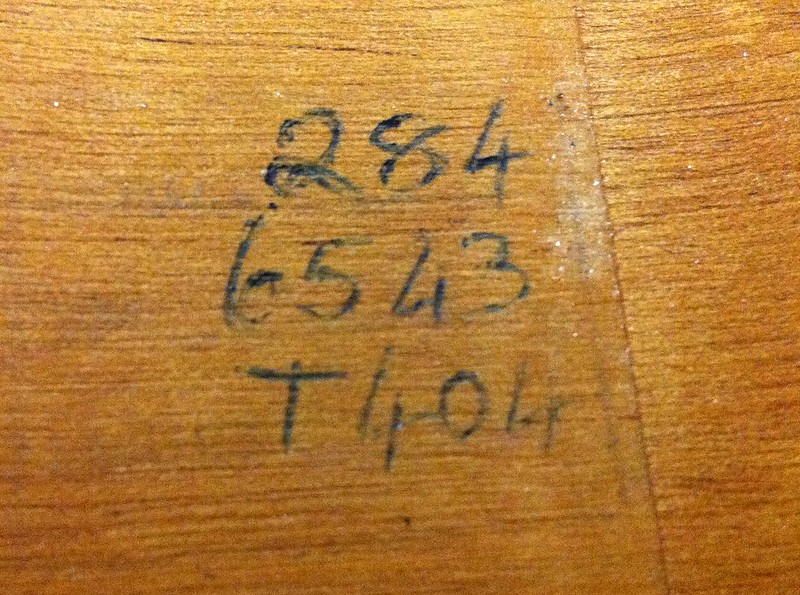 The kit included a hi-hat stand (possibly a derivation of the A600 direct pull model, which had a flat base), snare drum stand (model unknown, possibly a derivation of the A606 ‘Buck Rogers’ type stand), bass drum pedal (A602) and a Premier flat-based cymbal stand. The Drouyn stands are simple and quite elegant. They still function perfectly, although the rubber feet have mostly perished. Pictures to come. 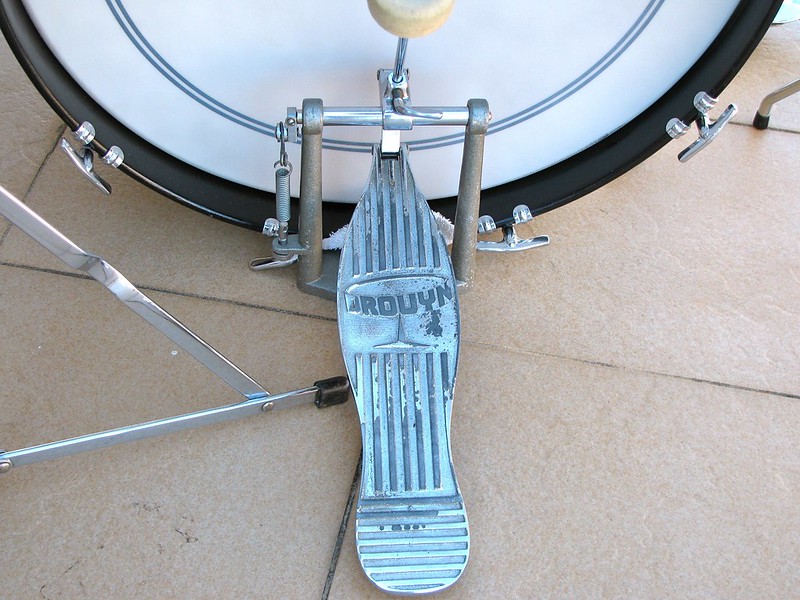